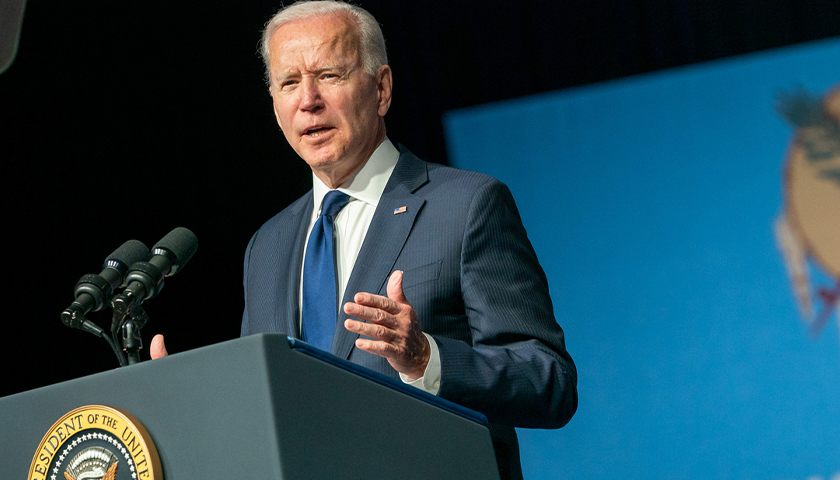 It was hardly surprising when President Biden used his speech on the 100th anniversary of the Tulsa Massacre to exacerbate racial tensions by shamelessly revising the history of black progress during the past century. Such demagoguery has long been a standard Democratic tactic. It was, however, startling to hear him claim that “Terrorism from white supremacy is the most lethal threat to the homeland today, not Isis, not Al-Qaeda — white supremacists.” If Biden truly believes this, he is unfit to be the commander in chief. Despite his insistence that this information was provided by the “intelligence community,” a joint report from the FBI and the DHS clearly refutes this claim.

Released on May 14, the “Strategic Intelligence Assessment and Data on Domestic Terrorism” reveals that the threat from domestic violent extremists (DVEs) is far lower than Biden would have us believe. According to the report, for example, “The year 2019 represented the most lethal year for DVE attacks since 1995, with five separate DVE attacks resulting in 32 deaths.” Even one such fatality is too many. Yet, compared to other causes of death, this number is infinitesimal. It is, according to the CDC, about half the average annual death rate associated with bee, hornet, and wasp stings. Moreover, the perpetrators don’t include roving bands of KKK hooligans or Neo-Nazis:

The greatest terrorism threat to the Homeland we face today is posed by lone offenders, often radicalized online, who look to attack soft targets with easily accessible weapons. Many of these violent extremists are motivated and inspired by a mix of socio-political goals and personal grievances against their targets.

The FBI–DHS report includes, in its list of DVE attacks, those committed by extremist animal rights and environmentalist groups that cause economic damage through criminal acts of destruction, sabotage, or arson. The report also contains information on terrorist acts carried out by Puerto Rican nationalists (who are rather disingenuously categorized as anti-government or anti-authority violent extremists), and the 2017 attack on a group of Republican congressmen at a baseball field in which four people were wounded, including House Republican Whip Steve Scalise (R-La.). The report, in other words, debunks Biden’s hyperbole about domestic terrorism.

Predictably, the media has ignored the new FBI–DHS report while echoing Biden’s balderdash and applauding his efforts to combat “the threat.” As the New York Times recently put it, “The administration has taken a series of steps to prioritize dealing with white supremacists and militias, especially after the Capitol riot on Jan. 6.” Virtually every news story on this issue mentions the “insurrection” despite the absence of any real evidence that it was organized by domestic terrorists. As of this writing, 505 participants have been charged, mostly for minor offenses, and only a precious few are affiliated with extremist groups of any kind. Indeed, the majority have been released:

At least 70% of people charged in the Capitol riot have been released as they wait for trial.… Some of the federal judges hearing the Capitol cases have expressed concern that certain defendants may have already spent more time in custody than they are likely to face as a punishment for their crimes.

Conspicuously absent from the corporate media coverage of Biden’s Tulsa speech was the Democratic Party’s domination of the South, including Tulsa, at the time of the massacre. In fact, Max Boot actually had the audacity to write the following nonsense in the Washington Post: “Republicans are determined to whitewash U.S. history.” This is not merely false, it’s utterly ludicrous. Why would the Republicans want to whitewash the sins of the Democratic Party — the party of slavery, Jim Crow, segregation, and the Tulsa massacre? The Tulsa County Democratic Party (TCDP) has been far more honest about its past. In a statement issued on May 28, the TCDP conceded the following:

The Democratic Party, at multiple points throughout history, has been represented by individuals that have held racist views; this includes Democratic National Committee members and Democratic elected officials on a national and a state level that had documented histories as members of the Ku Klux Klan and participants in the massacre.

Sadly, Biden was nowhere near as honest during his June 1 speech, wherein he asserted, “The Klan was founded just six years before the horrific destruction here in Tulsa. And one of the reasons why it was founded was because of guys like me who are Catholic. It wasn’t about African-Americans then.” Nope. The Klan was founded 56 years before the Tulsa massacre by former Confederate General — and Democratic politician — Nathan Bedford Forrest. Its mission was resistance to reconstruction by intimidating Republicans and murdering their voters, most of whom were black. Catholics, Jews, and immigrants weren’t added to the Klan’s harassment list until the 20th century.

While Biden was revising the nation’s history he also took a few minutes to revise his own biography. Near the end of his Tulsa speech he invoked the memory of John Lewis and made the following claim about the fabled GOP voter suppression effort: “This sacred right is under assault with incredible intensity like I’ve never seen, even though I got started as a public defender and a civil rights lawyer.” Biden was never a civil rights lawyer, of course. He has also lied about participating in civil rights marches. In reality, his history on race has been pretty egregious. He told so many lies about this during the 2020 campaign that the Washington Post awarded him Two Pinocchios.

The above is just a brief selection of the dishonest and ignorant claims our president made during his June 1 speech. That he wants us to believe Black Americans are no better off than they were a century ago is merely ridiculous. As time goes on, however, his stretchers are getting scarier. By far the most unnerving lie he told in Tulsa was that domestic terrorists constitute a more lethal threat than ISIS or Al-Qaeda. This is refuted by the FBI and DHS, and it’s eerily reminiscent of the clueless terrorism policy pursued by the Clinton administration in the late 1990s. Anyone who recalls 9/11 knows how that turned out. Is Biden fit to be our commander in chief? Really?

David Catron is a recovering health care consultant and frequent contributor to The American Spectator. You can follow him on Twitter at @Catronicus.